On April 2, the Federal Bureau of Investigation (FBI) along with the Cybersecurity and Infrastructure Security Agency (CISA) issued a joint cybersecurity advisory regarding activity involving advanced persistent threat (APT) actors.

In March 2021, the FBI and CISA observed APT actors scanning and enumerating publicly accessible Fortinet systems over ports 4443, 8443 and 10443. The agencies believe these APT actors are gathering a list of vulnerable systems in both the public and private sectors in preparation for future attacks. The advisory highlights three Fortinet vulnerabilities.

CVE-2018-13379 is a path traversal vulnerability in Fortinet’s FortiGate SSL VPN. An unauthenticated, remote attacker could exploit this vulnerability by sending a specially crafted request containing a path traversal sequence to a vulnerable Fortigate SSL VPN endpoint in order to read arbitrary files from the device. This vulnerability is a pre-authentication flaw, which means an attacker does not need to be authenticated to the vulnerable device in order to exploit it. Successful exploitation would allow the attacker to read the contents of the “sslvpn_websesion” session file that contains both usernames and plaintext passwords.

This vulnerability, along with several other Fortinet flaws, were discovered by researchers Orange Tsai and Meh Chang of the DEVCORE research team as part of their research into breaking SSL VPNs. A blog post about their findings was published in early August 2019; later that month, the first attempts to exploit CVE-2018-13379 in the wild were detected.

CVE-2019-5591 is a default configuration vulnerability in the FortiGate SSL VPN. Under the default configuration, when a Lightweight Directory Access Protocol (LDAP) server sends a connection request to the FortiGate device, the certificate is not verified. To exploit the vulnerability, an attacker could connect to a vulnerable FortiGate device by impersonating an LDAP server. Successful exploitation would allow the attacker to harvest sensitive information intended for a legitimate LDAP server.

SSL VPN vulnerabilities are a goldmine for threat actors

In our 2020 Threat Landscape Retrospective (TLR), CVE-2018-13379 cracked the Top 5 vulnerabilities of 2020, despite being disclosed in 2019. It was one of three SSL VPN vulnerabilities from 2019 that were favored by attackers in 2020. CVE-2018-13379 was also featured in multiple CISA alerts from late 2020 regarding APT groups targeting the public sector (AA20-283A) as well as activity originating from a Russian APT group (AA20-296A). We can expect to see additional advisories from government agencies regarding such legacy vulnerabilities, as threat actors will continue to leverage publicly known and unpatched vulnerabilities.

In January 2021, Amigo-A, a freelance reporter and researcher, discovered a new ransomware known as Cring.

A new #Cring #Ransomware https://t.co/NmIogn6lZZ
Extension: .cring
Note: deReadMe!!!.txt
Email: [email protected]***, [email protected]***
We've tracked it down over the past 2 months.
Originals of images are in the article on the site.@demonslay335 @BleepinComputer pic.twitter.com/xztNwcBwf3

CRING a new strain deployed by human operated ransomware actors. After the actors have established initial access, they drop a customized Mimikatz sample followed by #CobaltStrike. The #CRING #ransomware is then downloaded via certutill. ^mikehttps://t.co/v5h8eqHCPt pic.twitter.com/fkU2USEZis

At the time, it was uncertain how Cring gained initial access into their victim environments. However, on April 7, researchers at Kaspersky’s ICS-CERT team published a report regarding an incident investigation involving Cring. Kaspersky’s report linked the primary cause to vulnerable firmware versions on the FortiGate VPN server, and identified CVE-2018-13379 as the initial attack vector that permitted access to the enterprise network, and ultimately led to the deployment of the Cring ransomware. 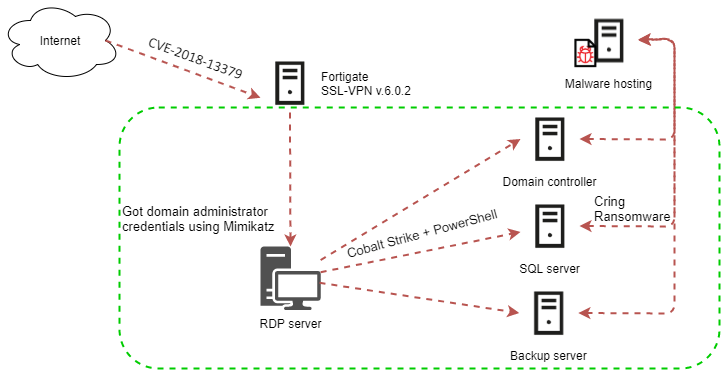 On April 3, one day after the FBI/CISA joint cybersecurity advisory was published, Troy Mursch, chief research officer at Bad Packets, tweeted that mass scanning activity for CVE-2018-13379 had been detected. 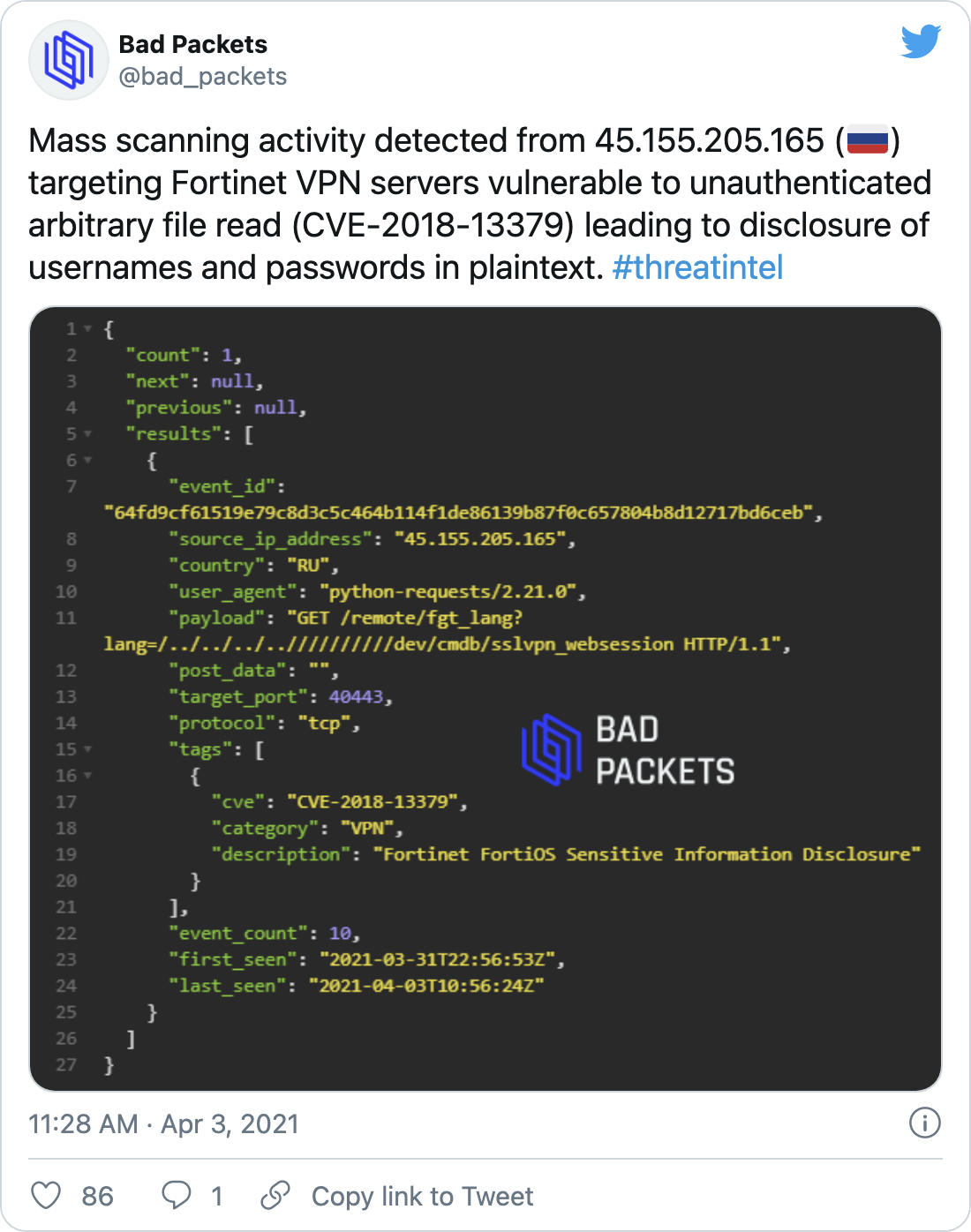 While this latest spike in activity is concerning, there has been significant mass scanning activity linked to the vulnerability since it was disclosed in 2019. As long as there are publicly accessible, unpatched Fortinet systems, we expect both sophisticated APT groups and cybercriminals in general to continue targeting them using these vulnerabilities.

At the time this blog post was published, there were 10 proof-of-concept (PoC) exploit scripts available on GitHub for CVE-2018-13379.

Fortinet released patches for all three vulnerabilities over the last few years. The following table contains a list of affected versions and fixed versions by CVE.

We strongly encourage all customers or Fortinet users to apply these patches as soon as possible to thwart exploitation attempts.

A list of Tenable plugins to identify these vulnerabilities can be found here.

As a Busy 2021 Draws to a Close, What is Capitol Hill Focusing on Next?

Cybersecurity priorities like zero trust, infrastructure security and more must remain top of mind for Congress in 2022  2021 has proven to be a big year for cybersecurity. Zero trust, a...
James Hayes
October 14, 2021