This blog series will provide an in-depth discussion of vulnerability priority rating (VPR) from a number of different perspectives. Part one will focus on the distinguishing characteristics of VPR that make it a more suitable tool for prioritizing remediation efforts than the Common Vulnerability Scoring System (CVSS).

Technical impact measures the impact on confidentiality, integrity and availability following exploitation of a vulnerability. It is equivalent to the CVSSv3 impact subscore. The threat component reflects both recent and potential future threat activity against a vulnerability. Some examples of threat sources that influence VPR are public proof-of-concept (PoC) research, reports of exploitation on social media, emergence of exploit code in exploit kits and frameworks, references to exploitation on the dark web and hacker forums and detection of malware hashes in the wild. Such threat intelligence is key in prioritizing those vulnerabilities that pose the most risk to an organization.

VPR is designed for vulnerability prioritization

The CVSS framework has long been criticized for its inability to prioritize vulnerability remediation effectively and efficiently. This is mainly due to the fact it was designed to measure the technical severity of vulnerabilities rather than the risk they pose. A report published by Carnegie Mellon University [CMU2019] points out:

The Common Vulnerability Scoring System (CVSS) is widely misused for vulnerability prioritization and risk assessment, despite being designed to measure technical severity. 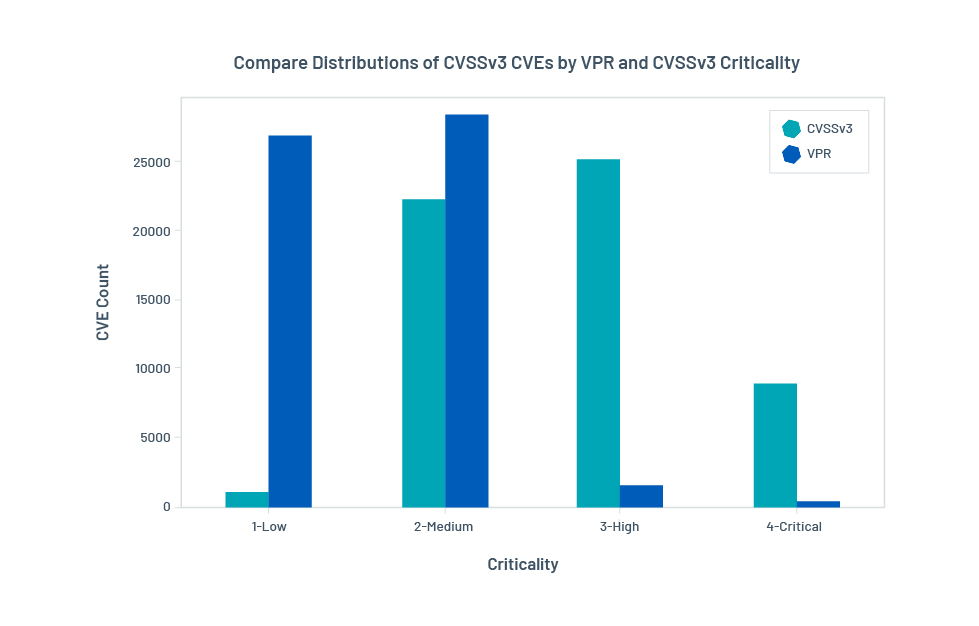 VPR is designed to avoid this type of issue by incorporating threat information into its formula. The chart above compares the vulnerability distribution of VPR and CVSSv3. Due to the dynamic nature of threats, the number of VPR Criticals changes slightly every day. On an average day, VPR rates around 700 vulnerabilities as Critical, and fewer than 5,000 as High. These numbers account for less than 1% and 4%, respectively, of all vulnerabilities. With fewer Critical vulnerabilities to focus on, security teams can design vulnerability remediation plans more efficiently.

A natural question to ask at this stage is that of efficacy: How many risky vulnerabilities can be captured by VPR? The remainder of this blog post will compare the efficacy of VPR and CVSSv3 in identifying risky vulnerabilities. But first, we will examine how VPR is generated.

VPR: Under the hood

At the heart of VPR are machine learning models working together to forecast threats. Specifically, the threat forecast seeks to answer the question: What is the appropriate level of near-term threat for a vulnerability based on the latest available data? To train VPR models to answer this question, it is fed with historical data sourced from various feeds:

Collectively, this raw data is fed to the VPR pipeline on a daily basis. The VPR score (9.6 in the example below) is generated by combining the predicted threat and the impact (taken from the CVSSv3 impact score) for each vulnerability. Figure 2 illustrates this process.

Comparative analyses highlight that a remediation strategy based on VPR can have higher efficacy than a CVSS-based approach.

Taking a proactive stance against emerging threats can help security teams attain a time buffer for hardening their attack surface. One example of proactive defense is to frequently scan the network and patch every vulnerability classified as CVSS Critical in the remediation window. This approach can lead to high efficacy in network hardening, but is usually difficult to execute due to the sheer volume of vulnerabilities falling into this category.

VPR is designed to prioritize vulnerabilities with a higher likelihood of being targeted by threat actors in the near term while filtering out those deemed to be less risky. This is the predictive nature of VPR. At this point, one might be curious about how predictions are made. There is no magic here! VPR’s prediction is based on a simple rule: The evolution of the threat for a vulnerability in the wild will typically follow the same pattern as similar vulnerabilities have followed in the past.

In the following tables, we show that remediation strategies designed to follow VPR can achieve the same level of efficacy as fixing all CVSS Criticals with much higher efficiency. Here, we use the ability to identify vulnerabilities with IoC in the next 28 days to benchmark VPR against CVSSv3. IoCs are artifacts that are often considered strong evidence of exploitation. They include malware hashes, IP addresses, URLs and so on. We obtain IoCs from commercial data providers such as ReversingLabs and VirusTotal.

Table 1. The number of vulnerabilities with IoC spotted in the wild in the next 28 days for VPR (left) and CVSSv3 (right)

Having highly mature exploit code increases the likelihood that cybercriminals will use the vulnerability in a cyberattack. Hence, it is important for VPR to prioritize vulnerabilities with publically available exploit code. Note that our classification of exploit code maturity used in this analysis follows the convention of CVSS. In summary, high maturity means functional, autonomous exploit code exists. Functional means exploit code is weaponized and PoC means the exploit code works, in theory. More details can be found on CVSSv3 specs [CVSSv3]. We source exploit code from multiple repositories and exploit kits, such as Metasploit, Core Impact, Exploit DB, D2 Elliot, Packet Storm, just to name a few.

Figure 3. Proportion of vulnerabilities in each criticality band broken out by exploit code maturity for VPR (top) and CVSSv3 (bottom) 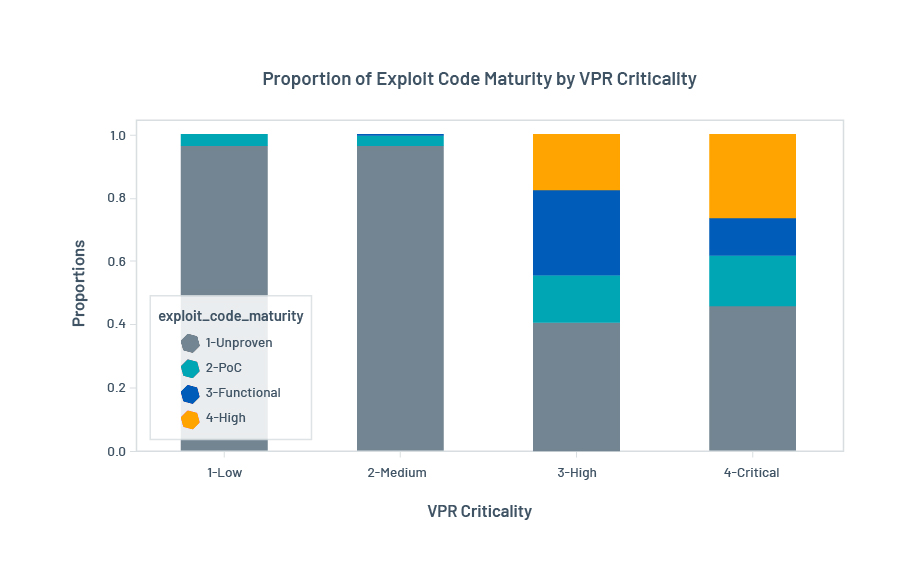 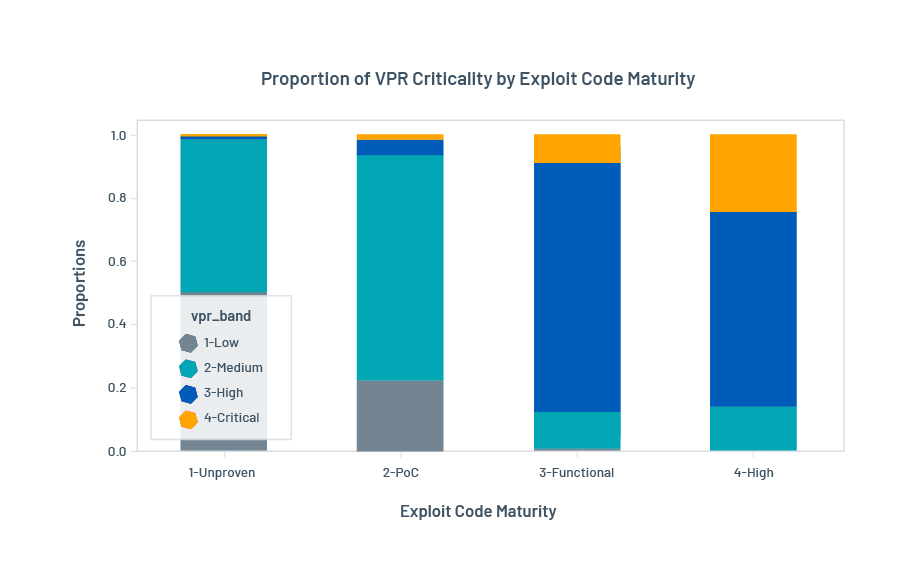 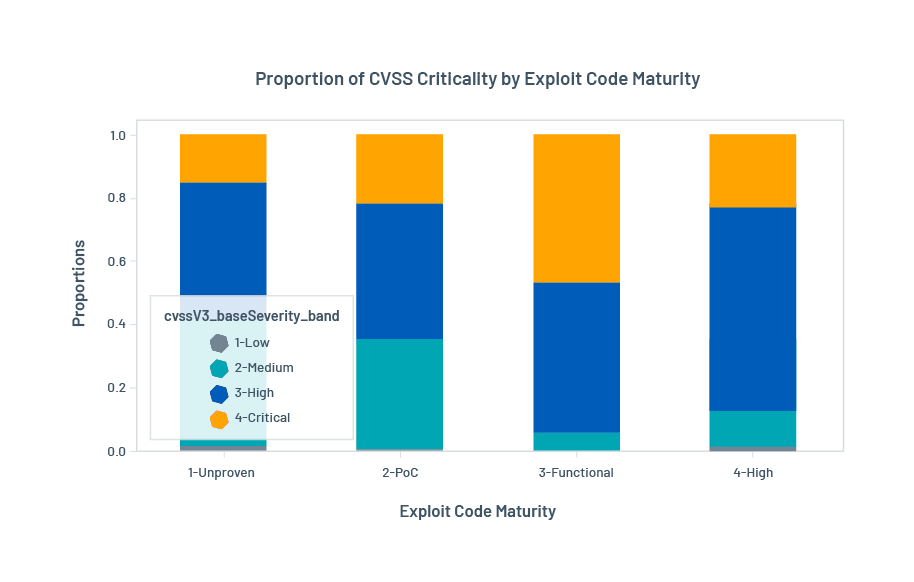 IoCs provide direct evidence of exploitation, but are not the only sign of threats. Another signal is when there is active research for how to exploit a vulnerability: Exploit code of a vulnerability becomes available or has escalated maturity.

Table 2. The number of vulnerabilities with escalated maturity of exploit code in the next 28 days by VPR (top) and CVSSv3 (bottom)

So, in circumstances where patching vulnerabilities with escalating exploit code is the goal, a good strategy would be to first prioritize based on VPR Critical to get a high hit rate, and secondly by CVSS High and Critical, in turn, to increase coverage.

In this post, we have discussed VPR and what makes it more than just another CVSS. In summary:

How to Use VPR to Manage Threats Prior to NVD Publication

How does Tenable’s&nbsp;VPR score help users manage newly disclosed vulnerabilities, even before they’re published on the National Vulnerability Database (NVD)? Let’s find out. In April, we published...

This is the third installment in our three-part series exploring how to use Tenable products to protect credentials used for network assessments. Here, we focus on ’nix style systems: Linux, Unix and ...

This is the second installment in our three-part series exploring how to use Tenable products to protect credentials used for network assessments. Here, we provide specific guidance for Microsoft Wind...