CVE-2020-1350 is a critical remote code execution (RCE) vulnerability in Windows DNS servers due to the improper handling of DNS requests. It was assigned a CVSSv3 score of 10.0, the highest possible score. To exploit this vulnerability, an attacker would send a malicious request to a vulnerable Windows DNS server. Successful exploitation would grant the attacker arbitrary code execution privileges under the Local System Account context. Microsoft warns that systems at risk include “Windows servers” that have been “configured as DNS servers.”

In March of this year, Microsoft released patches for CVE-2020-0796, a wormable RCE vulnerability in Microsoft Server Message Block 3.1.1, known as EternalDarkness or SMBGhost. While we have yet to see SMBGhost used in a wormable fashion, SIGRed marks the second wormable Microsoft vulnerability patched this year.

SIGRed can be triggered via the browser

Researchers at Check Point found that they could remotely trigger the vulnerability through a web browser. This is achieved by “smuggling” a DNS query in an HTTP request as part of the POST data. However, this vulnerability can only be exploited through browsers that accept HTTP requests over the standard DNS port (53), which include Internet Explorer and Microsoft Edge versions that are not using Chromium.

As part of a demonstration, Check Point Researchers show how they could trigger the vulnerability by sending a link to a user in an email, which when opened would smuggle the DNS query inside of the HTTP request.

At the time this blog post was published, there was no working proof-of-concept (PoC) code available for this vulnerability. However, we have seen at least one fake PoC that RickRolls users. In the past, we’ve also observed some malicious scripts that masquerade as PoCs being published to GitHub. We strongly advise caution when dealing with alleged PoCs.

Since CVE-2020-1350 was made public on July 14, PoCs have been published to GitHub including scripts to apply the mitigation instructions listed in the Solutions section, as well as a few scripts [1, 2] that exploit the flaw in order to cause a denial of service.

Tenable strongly encourages organizations to apply these patches as soon as possible.

If applying these patches is not currently feasible, Microsoft provided a workaround via a Windows registry modification:

In order for these changes to take effect, the DNS Service must be restarted.

Microsoft recommends removing the workaround after patches have been applied.

On July 17, our Audit and Compliance team released an audit file for Tenable products that will detect whether or not the mitigation has been applied to assets.

When a target is scanned, it will produce the following result: 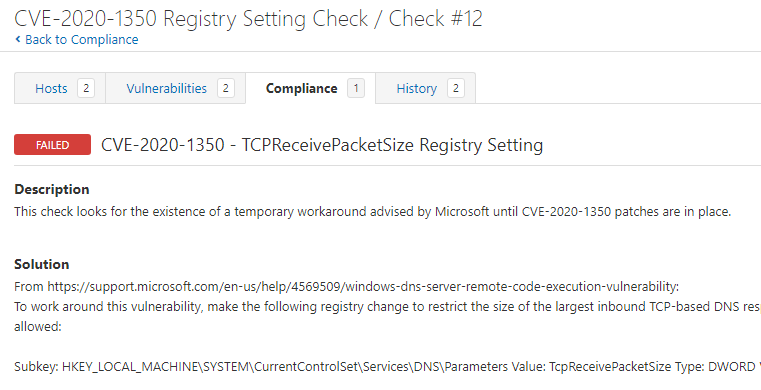 Satnam joined Tenable in 2018. He has over 15 years experience in the industry (M86 Security and Symantec). He contributed to the Anti-Phishing Working Group, helped develop a Social Networking Guide for the National Cyber Security Alliance, uncovered a huge spam botnet on Twitter and was the first to report on spam bots on Tinder. He's appeared on NBC Nightly News, Entertainment Tonight, Bloomberg West, and the Why Oh Why podcast.