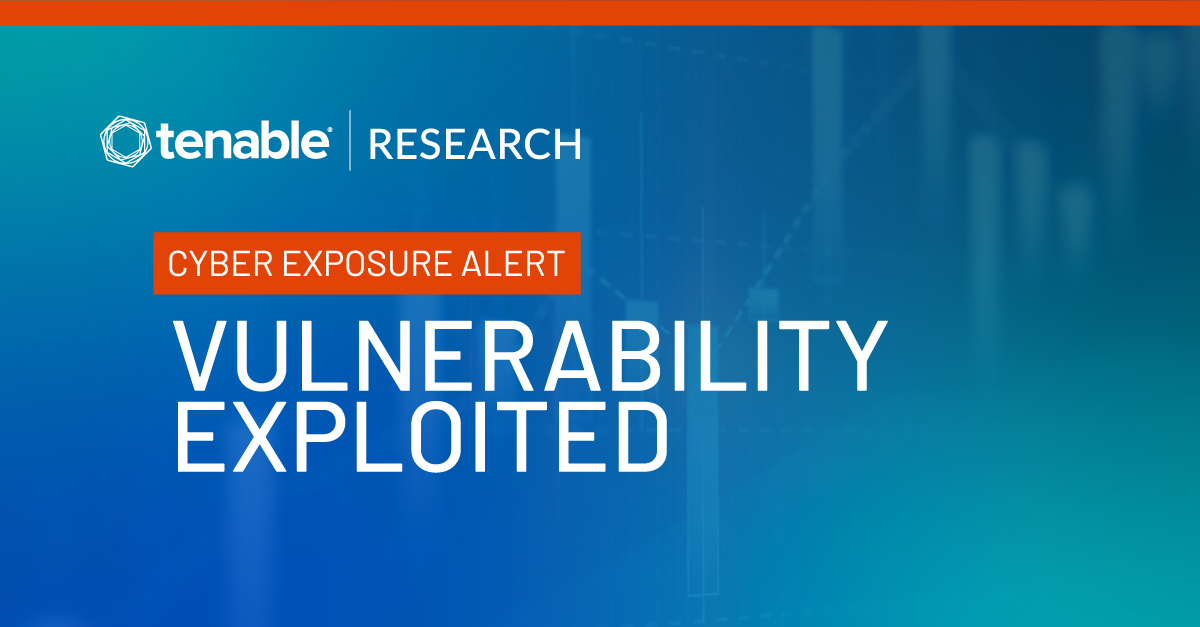 Update October 13, 2020: The Identifying affected systems section has been updated to include details about the availability of a Zerologon scan template for Tenable.io, Tenable.sc and Nessus.

The following is a list of vulnerabilities referenced in the CISA/FBI joint cybersecurity alert:

*Please note Tenable VPR scores are calculated nightly. This blog post was published on October 12 and reflects VPR at that time.

According to the CISA/FBI alert, the APT actors are “predominantly” using CVE-2018-13379 to gain initial access to target environments.

CVE-2018-13379 is a path traversal vulnerability in Fortinet’s FortiOS Secure Socket Layer (SSL) virtual private network (VPN) solution. It was patched by Fortinet in April 2019. However, it wasn’t until after exploitation details were made public in August 2019 that reports emerged of attackers exploiting it in the wild.

In addition to the Fortinet vulnerability being used to gain initial access, CISA/FBI have also observed “to a lesser extent,” APT actors using CVE-2020-15505, a remote code execution vulnerability in MobileIron’s Core and Connector.

Once the APT actors have gained an initial foothold into their target environments, they are elevating privileges using CVE-2020-1472, a critical elevation of privilege vulnerability in Microsoft’s Netlogon. Dubbed “Zerologon,” the vulnerability has gained notoriety after it was initially patched in Microsoft’s August Patch Tuesday release.

On September 18, CISA issued Emergency Directive 20-04 in an effort to ensure Federal Civilian Executive Branch systems were patched against the vulnerability.

Zerologon observed as part of attacks in the wild

On September 23, Microsoft’s Security Intelligence team tweeted that they had observed the Zerologon exploits being “incorporated into attacker playbooks” as part of threat actor activity.

Microsoft is actively tracking threat actor activity using exploits for the CVE-2020-1472 Netlogon EoP vulnerability, dubbed Zerologon. We have observed attacks where public exploits have been incorporated into attacker playbooks.

CISA/FBI warn of additional vulnerabilities being targeted for initial access

In addition to the Fortinet and MobileIron vulnerabilities identified in recent campaigns, the CISA/FBI alert also warns that these APT threat actors may also leverage one of the following vulnerabilities to gain entry into their targeted networks:

Many of the vulnerabilities referenced in this joint alert from CISA/FBI have become evergreen flaws for threat actors. As part of CISA’s Top 10 Routinely Exploited Vulnerabilities alert, they reference both the Pulse Secure and Citrix ADC vulnerabilities.

In Alert AA20-283A, CISA mentions that they observed activity that “resulted in unauthorized access to elections support systems.” However, they also mention that despite said unauthorized access, they have no evidence to support that the “integrity of elections data has been compromised.”

Zerologon needs to be patched immediately

With the latest alert from CISA and the FBI, coupled with reporting from other vendors, it seems clear that Zerologon is becoming one of the most critical vulnerabilities of 2020.

Please refer to the individual advisories below for further details.

A list of Tenable plugins to identify these vulnerabilities can be found here:

Tenable.io, Tenable.sc and Nessus users can use a new scan template dedicated to targeting Zerologon. Plugin 140657 and its dependencies are automatically enabled within the template, and it also comes with the required settings automatically configured.

Satnam joined Tenable in 2018 as a Senior Security Response Manager. He has over 14 years experience in the industry (M86 Security and Symantec). He contributed to the Anti-Phishing Working Group, helped develop a Social Networking Guide for the National Cyber Security Alliance, uncovered a huge spam botnet on Twitter and was the first to report on spam bots on Tinder. He's appeared on NBC Nightly News, Entertainment Tonight, Bloomberg West, and the Why Oh Why podcast.

Interests outside of work: Satnam is a poet and a rapper. He enjoys live music, spending time with his four nieces, watching Netflix, Bollywood movies and music and playing Fantasy Football.