Oracle addresses 231 CVEs in its third quarterly update of 2021 with 342 patches, including 49 critical updates. 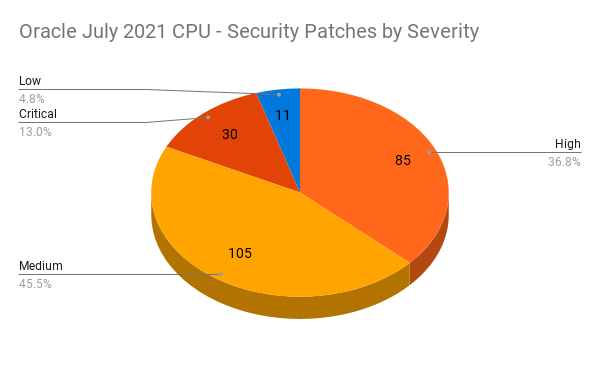 This quarter’s update includes fixes for 49 critical issues across 30 CVEs. 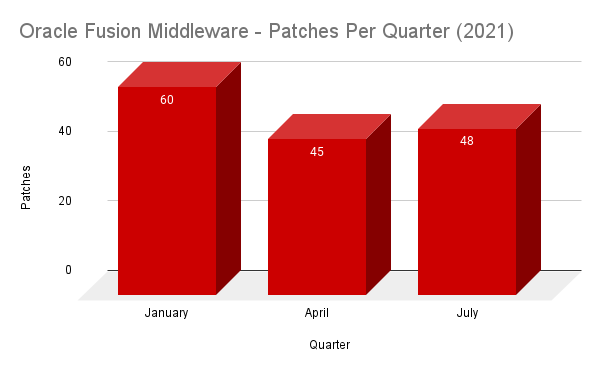 Of the 48 Fusion Middleware patches this quarter, 35 are remotely exploitable without authentication.

A full breakdown of the patches for this quarter can be seen in the following table:

As part of the July 2021 CPU, Oracle released a patch for CVE-2019-2729, a critical deserialization vulnerability in Oracle WebLogic Server that was originally patched in an out-of-band update in June 2019. The vulnerability in Hyperion Infrastructure Technology exists within the Installation and Configuration component. Organizations that use the Hyperion Infrastructure Technology should apply the available patch as soon as possible.

Because WebLogic has previously been a favorite initial access vector for attackers, including ransomware groups like REvil (also known as Sodinokbi), we parse Oracle’s CPUs with a focus on WebLogic vulnerabilities. This quarter, there were six vulnerabilities patched within Oracle WebLogic Server (not including those in third party libraries).

Three of the six vulnerabilities in WebLogic Server were assigned a CVSSv3 score of 9.8 out of 10, which classifies them as critical. According to its advisory, Oracle says that CVE-2021-2397 also addresses CVE-2020-14756, which was another critical WebLogic Server vulnerability that was originally patched as part of the January 2021 Critical Patch Update.

At the time this blog post was published, there were no proof-of-concept (PoC) exploits for any of the new WebLogic server vulnerabilities, though we anticipate that researchers may share details in the future. However, there are six PoCs for CVE-2019-2729.

Customers are advised to apply all relevant patches in this quarter’s CPU. Please refer to the July 2021 advisory for full details.

Protecting the Atomized Attack Surface: Cybersecurity in the New World of Work

A new study reveals how moving to a remote workforce model and migrating business-critical functions to the cloud are exposing the vast majority of organizations to increased risk. The next 18...
Robert Huber
September 22, 2021

Spotlight on Mexico: The New World of Work Requires a New Cybersecurity Mindset

Embracing the new world of hybrid and remote work in Mexico has opened the door to new and unmanaged cyber risk. Here's what you need to know. The pandemic completely transformed the way most...
Francisco Ramirez de Arellano
September 22, 2021